The February 3, 2010 edition of The Burlington County Times featured a profile about one of Novell’s retailers – David Arlen Jewelers. Owner David Arlen Sendrow started following his passion for jewelry by renting out space for his jeweler’s bench in a dry cleaner with just one showcase. From such humble beginnings, David Arlen Jewelers has grown into its own location requiring a fully-trained staff of seven employees. And as it says on his logo, David regards himself as “the stress free jeweler.” 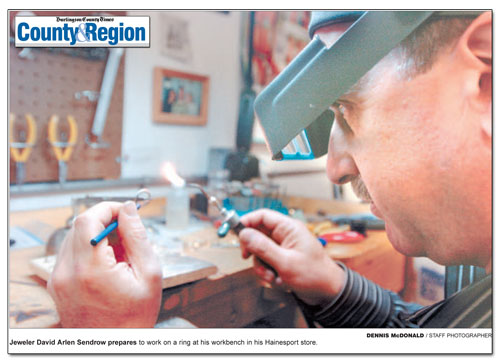 For him, every day is a gem

HAINESPORT – With Valentine’s Day approaching, love is in the air, especially in a jewelry store where the course of true love often leads.

At David Arlen Jewelers, owner David Arlen Sendrow and his staff are busy showing customers their popular diamond hearts and Pandora bracelets. After Christmas and Mother’s Day, the February holiday is their most active.

Although he could not have known it at the time, Sendrow already had taken the first step toward what would become his career when he was still in high school.

He discovered he had a passion and a talent for working with metals.

The revelation came during a class at Cherry Hill East High School.

Even today, given a choice, Sendrow would rather be at his workbench coaxing a new design out of his materials than anywhere else. Clerical work takes up time every day, but at the first opportunity he is at his bench.

His career choices did not present themselves overnight. There were detours along the way, but he was always alert to new possibilities and quick to change course when it seemed wise.

Become a fan of David Arlen Jewelers on Facebook.

Get directions to David Arlen Jewelers.