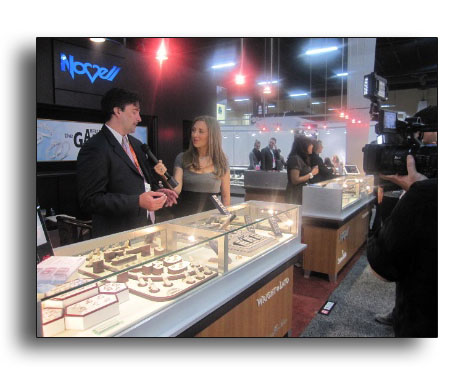 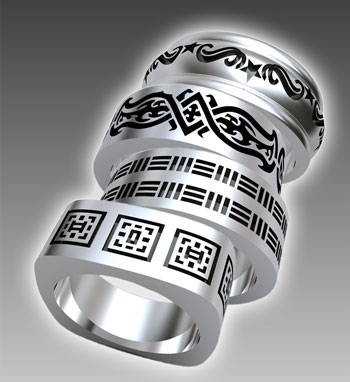 The future for wedding bands will arrive at this year’s JCK Show in Las Vegas!  Novell  will be unveiling a very original concept for wedding bands and jewelry in general – designs inspired from actual tattoo themes. Rings in the new TATU Collection are created in stainless steel or palladium, and a select few have been fashioned especially in platinum. Additional wedding band styles produced with sterling silver and black diamonds will also be available. TATU wedding bands will be offered through authorized Novell retailers over the summer.

The JCK Show is a jewelry industry-only event that will take place June 4 through June 7. Jewelry industry professionals can visit Novell at booth 5081. View other wedding bands and bridal jewelry that Novell will be featuring at the 2010 JCK Show in Las Vegas.

Novell palladium wedding band style LNQP118-6GCX was featured in “Best of the Best: JCK Jewelers Choice Awards,” a supplement which accompanies the April 2009 issue and is also bound into the JCK Las Vegas Show Guide. This style recently earned 3rd place in the Palladium Jewelry/Under $2,000 category for this annual jewelry industry contest. Other finalists were Diaco Diamonds and Simon G. Over 16,000 retailers participated in the voting! 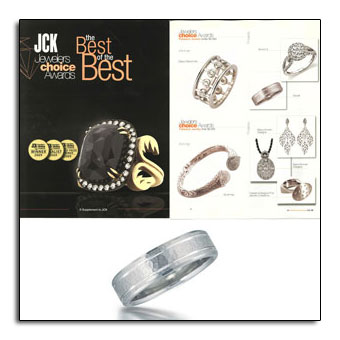 Learn more about choosing palladium for your wedding band.

Novell was a finalist in the 2009 JCK Jewelers Choice Awards Contest. Our palladium wedding band style LNQP118-6GCX (shown above) placed 3rd in the Palladium Jewelry/Under $2,000 category. Over 16,000 retailers voted!

The winners for all categories were formally announced in the March issue of JCK Magazine. A product photo was featured in the “Best of the Best” JCK Jewelers Choice Awards supplement, which accompanies the April issue and also bound into the JCK Las Vegas Show Guide.

Read more about Novell and palladium.

The November 2008 edition of JCK Magazine features a quote from Novell marketing guy Rick Mulholland about the methods Novell employs to reduce environmental waste within the jewelry industry.

Have you ever stopped to wonder about the fate of the various catalogs, flyers, and brochures you send out on a daily, monthly, or yearly basis? Ever wondered how much of that ends up in the hands of people who may not have one of those nice blue recycling buckets next to their desks? Rick Mulholland, marketing director for Novell Design Studio in Roselle, N.J., looked at the amount of money his company was spending on paper, and he knew—from both an economic and an ecological standpoint—that it had to be reduced. Over the last two years he has been actively promoting the availability of the company’s catalog and latest brochures as PDF downloads. Mulholland says that thousands of Novell customers have downloaded the online material over the last few years. In doing so, they’ve helped to reduce the expenses and environmental impact related to collateral production and mailing while simultaneously increasing the reach of the company’s message. “About a year ago, if 100 catalogs were downloaded in a month, that was a good month,” he says. “Now, for some months we see at least 1,000 downloads of fairly large files. And I rarely send out a physical catalog.” Mulholland says his downloads in a 30-day period peaked at 6,636 in November 2007. “Imagine the cost if I had to mail them all out!” he says. Not to mention the paper waste. “If more companies encouraged downloads or electronic distribution, then less paper would be used, and the jewelry industry would be a greener industry to work in.” 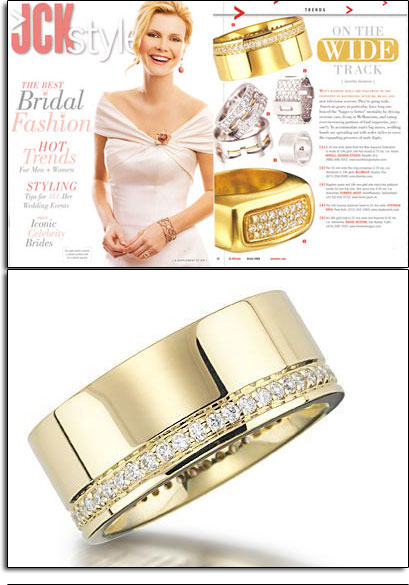 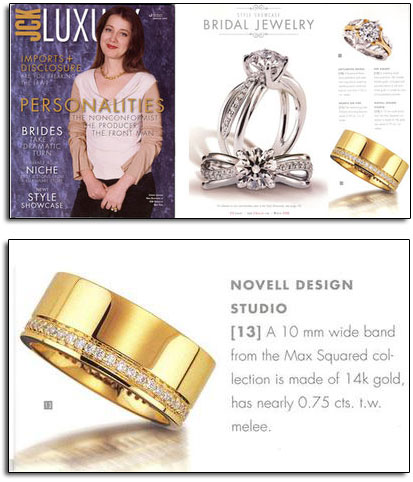 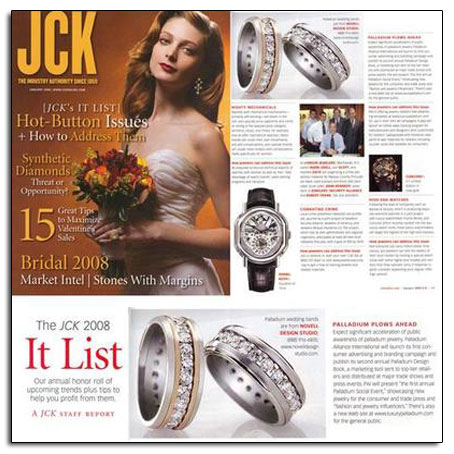