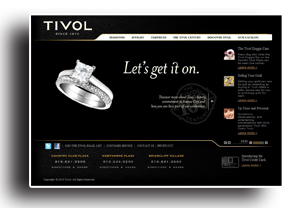 In 1910, Charles Tivol opened a jewelry shop in downtown Kansas City. Perched on a bench, he carefully crafted each piece of jewelry and set a timeless standard for enduring workmanship and style.Charles also handed down his unrelenting passion for quality. His son Harold began working in the store as a boy and now serves as chairman of the company. Under Harold’s leadership, a second store was opened in 1951 on the Country Club Plaza. Soon, it was outselling the downtown store, and the two later merged.

Nearly a century after its doors opened, Tivol‘s tradition continues with its third generation. Under the leadership of Harold’s daughter Cathy, Tivol has continued to flourish. A second location was opened in 1994 in Johnson County’s Hawthorne Plaza. Tivol added a third location in 2006 at Briarcliff Village in the heart of the Northland.

Now that the business has attained the 100-year mark, Tivol is going stronger than ever, maintaining our tradition of offering the world’s most beautiful jewelry and timepieces in a variety of price ranges.